Leave a comment
Fail, Get Out Of Jail Free

Week Nine – Horrible Fail / Get Out of Jail Free

Here it is, kindly designed for me by Neil, the first of two get out of jail free cards.  I of course, am continuing to work on the piece of art I started four weeks ago.  I will openly admit that I am now dragging my feet on it.  I sort of resent it for sucking my social life down the drain.  Not even sort of – I just straight up do resent it.  Because I didn’t want to finish it, I decided to replace a pair of Pajama pants that are totally old and falling apart. 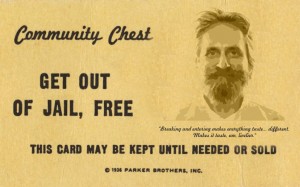 I made myself this awesome freezer paper pattern from the pants themselves.  For your sanity’s sake, I am not including a photograph of the original pants.  Trust me – they’re covered in paint and holes, and you don’t want to see them.  Just know that the pattern is really pretty true to the originals, and I am surprised at how good it is.

I don’t have a serger, or any kind of fancy shmancy machine to sew knits, so I used this tutorial I found online for sewing knit fabrics with a conventional machine, and chose to use the double needle method.  I worked super-terrifically until I got to the waistband of the pants, at which point my machine started only catching on every fifth stitch.  I chose to ignore that, since the seam it sewed like that on was not structurally necessary.

I get to the last seams on Sunday afternoon – all I needed to do was hem the dumb things.  The sewing machine started catching every tenth stitch.  I try sewing conventional woven thread?  Works like a dream.  Obviously I am doing something wrong with the knit fabric.  I went to go online to troubleshoot my problem, and I had no internet.  Did I mention that I don’t know why I’m paying Sprint for data?  My phone has no data connectivity either.

And so – after much swearing and gnashing of teeth, I threw in the towel.  More next week.

SEWING MACHINE UPDATE:  Yesterday I went to sew a birthday present for Neil’s goodly wife, Maureen, and discovered that my machine only sews one layer of fabric like a dream, rendering it completely useless as a sewing machine.  Takeaway?  I need a new shuttle for that machine.  Also, in hindsight, I could have just switched machines.  It’s not like I don’t have four other waiting in the wings.  In my own defense, however, I didn’t think it was the machine, just that I was humanly incapable of sewing knit fabrics together.

Today’s post is brought to you by the good folks at Bed Bath and Beyond because they are the only store on this entire earth that still stocks flour sack towels.  I was going to stretch this and make it a hanging canvas, but my strainer stock did not come in on time.

I give you, the Sheet of Paper Towel.  It is an 8.5×11 piece of flour sack towel, with ink and brass grommets.  I have  been in love with this idea from the moment I had it.  Kyle suggests that I make some paper sheets for the bed, which I think is brilliant as well, though it would take a lot more work. 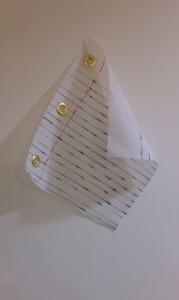 I am considering making another and stretching it on strainer stock when that comes in.  Does repeating break the rules?  You tell me.

Week Seven – Valentine for a Kyle

For real – something great is in the works.  That said, I made a super sweet Valentine’s card for Kyle as my week seven project.  It was done using the tutorial for a dream-catcher card that I found over at Zakka Life. 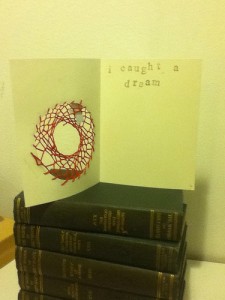 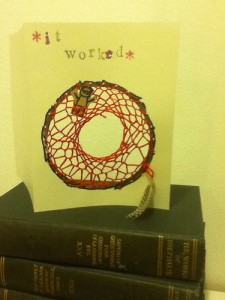 I put a little Kyle illustration of Kyle in there, along with a feather, and I stamped the text.  Apparently my violet stamp pad is pretty much dead as evidenced by the horrible way all of the purple characters look.  There it is – short sweet and to the point. 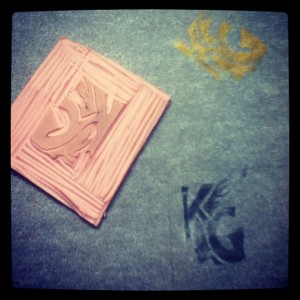